The Never-Ending Maze: Continued Failure to Protect Indigenous Women from Sexual Violence in the USA

Amnesty International is grateful to the American Indian and Alaska Native organizations, experts and individuals who provided guidance on research methodology and the report itself and who have generously shared information. The scope and depth of the work led by Native women in support of the rights and safety of their communities is immense. Amnesty International hopes that this report can contribute to and support the work of the many American Indian and Alaska Native women’s organizations and activists who have been at the forefront of efforts to ensure that the rights of Indigenous women are respected, protected and fulfilled.

Any work on this topic must acknowledge that the problem of sexual violence is part of a history and continued reality of systemic violence against Indigenous Peoples.

European/US colonizers forcibly relocated many Indigenous peoples from their land, committing widespread atrocities in the process. Killings on a massive scale, as well as disease and starvation, devastated the Indigenous peoples of North America. Gender-based violence against women by settlers was used as part of conquest and colonization. Violence against Native women is not confined to distant history, and has oftentimes been carried out with explicit intent by the US government, including forced boarding school for Native children and forced and coerced sterilization performed on Indigenous women. Other violence has been allowed to happen because of gross neglect by the US government, including sexual abuse of Native women and minors by Indian Health Service doctors. What’s more, Native women are murdered and go missing at incredibly high rates. 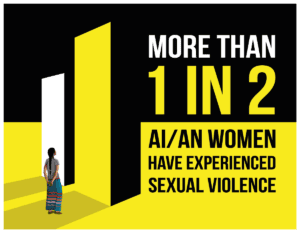 Indigenous women experience a broad, multifaceted and complex spectrum of mutually reinforcing human rights abuses. That spectrum is influenced by multiple and intersecting forms of vulnerability, including patriarchal power structures; multiple forms of discrimination and marginalization, based on gender, class, ethnic origin and socioeconomic circumstances; and historical and current violations of the right to self-determination and control of resources.

The steady and deliberate degradation of tribal sovereignty by the US federal government has exacerbated the epidemic of sexual violence against Indigenous women. The US’s failure to respect, protect, and fulfill Indigenous women’s rights has led to the high rates of sexual violence. A variety of human rights are at stake when the US fails to adequately prevent and respond to this epidemic of violence:

Indigenous Peoples rights also have specific rights, these include:

The United States’ failure to respect, protect and fulfill the rights of Indigenous Peoples in the USA has exacerbated the crisis of sexual violence against Indigenous women.

Lost in the jurisdictional maze

I had a case where a woman called the police because her partner was beating her up and assaulting her, and as an advocate I was called along. When we got outside the door, all the various agencies were standing outside arguing about whose jurisdiction it wasn’t. They didn’t even want to take her in for a rape kit because it was her boyfriend. What? Because it’s his right? And that was their attitude. We did get her a rape kit, but she didn’t want to pursue the case, and I don’t blame her.

The USA has formed a complex interrelation between federal, state and tribal jurisdictions that undermines tribal authority and allows perpetrators of sexual violence against Native women to evade justice. Three main factors determine where jurisdictional authority lies in these cases:

Since the publication of the original Maze report in 2007, several pieces of legislation have been passed with the intention of protecting Indigenous survivors of sexual violence:

Instead of untangling the jurisdictional maze that federal Indian law has created, the USA has only incrementally chipped away at this issue.

Piecemeal legislation, even with good intentions, cannot begin to protect Native women from violence until the jurisdictional complexities within Indian country are resolved.

Someone goes missing, you go to the BIA, but they say ‘oh she was living down in town, you have to go to the city police’. So you go to the city police and they say ‘oh she is actually living out at her cousin’s in another county, you have to go there.’ And you go there, but she’s tribally enrolled, and the town says ‘oh she’s tribally enrolled, that’s a tribe issue.’ So now you have three half-finished reports on a missing girl, when every minute counts.

Police response to sexual violence against Native women is inadequate and serves as a major barrier to justice for survivors. Jurisdictional confusion and limitations on tribal police impede Native survivors of sexual violence from obtaining justice. A lack of resources for tribal police, poor interagency coordination and insufficient investigative responses have all had negative impacts on police response to sexual violence against Native women. Tribal law enforcement agencies in many areas still do not have adequate resources or training to be effective; many tribal law enforcement agencies, like other services for Indigenous peoples, continue to be at the mercy of annual or other short-term funding.

Through communication with our tribal advocacy and law enforcement partners, we learned that often American Indian/Alaska Native victims first call the local IHS [Indian Health Service] clinic in search of post sexual assault care. IHS would refer them to urban locations sometimes two or more hours away. Referral facilities would commonly report being unable to conduct the exam and send the victim on to yet another facility. A lot of victims just give up.

Native women who survive sexual violence are not guaranteed to receive adequate and timely sexual assault forensic examinations (including a rape kit), which are vital for a successful prosecution. This failure is caused in part by the federal government’s severe underfunding of the Indiean Health Service (IHS), IHS understaffing and staff turnover, a lack of clarity within the IHS on the availability of rape kits or trained professionals who can administer the exam, and policies resulting in major geographical gaps in post-rape care. Many healthcare facilities are too far away or closed when the survivor needs care. Even if a woman can get to a facility, a rape kit may not be available or there may not be qualified staff available to administer it. Survivors must often face the emotional and logistical difficulties of seeking non-Indigneous care, where they will not receive culturally-appropriate care and may face prejudiced and racist treatment.

Unless it’s a winnable case, prosecutors are just declining them. What message does that send to a community that wants to make a change? [It says] you can do this to me and there will be no consequences. We tell our children: just avoid that house. We tell our women: don’t go out after dark.

The federal, state and tribal justice systems in the USA are not responding adequately to Native survivors of sexual violence. The US government has interfered with the ability of tribal justice systems to respond to crimes of sexual violence through underfunding, prohibiting tribal courts from trying non-Indian suspects for most crimes of sexual violence and limiting the custodial sentences which tribal courts can impose for any one offense. When jurisdiction falls to federal or state authorities, and cases are pursued through the federal or state court system, Native women are often denied access to justice: many cases are not pursued, or federal or state authorities do not adequately coordinate with tribal authorities. Since 2013, both the total funding for US Attorney’s Offices in Indian country and the number of attorneys responsible for Indian country prosecutions has decreased by 40%. Survivors are often left with no justice, and perpetrators can continue to commit crimes with impunity.

Handbook: “What to do When You’re Raped: An ABC Handbook for Native Girls”